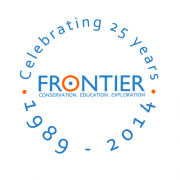 Frontier was established in 1989 as a non-profit conservation and development non-governmental organisation (NGO) dedicated to safeguarding biodiversity and ecosystem integrity and building sustainable livelihoods for marginalised communities in the world's poorest countries. Our first projects were in Tanzania, one of the world's poorest countries. Carrying out groundbreaking surveys in remote forest, savannah, and marine environments, our dedicated teams of volunteers set about building a comprehensive picture of areas that were heretofore ignored, despite being, as we discovered, among the most biodiverse areas in the world.

"Frontier" is the operating name of The Society for Environmental Exploration.

Email me jobs from Frontier